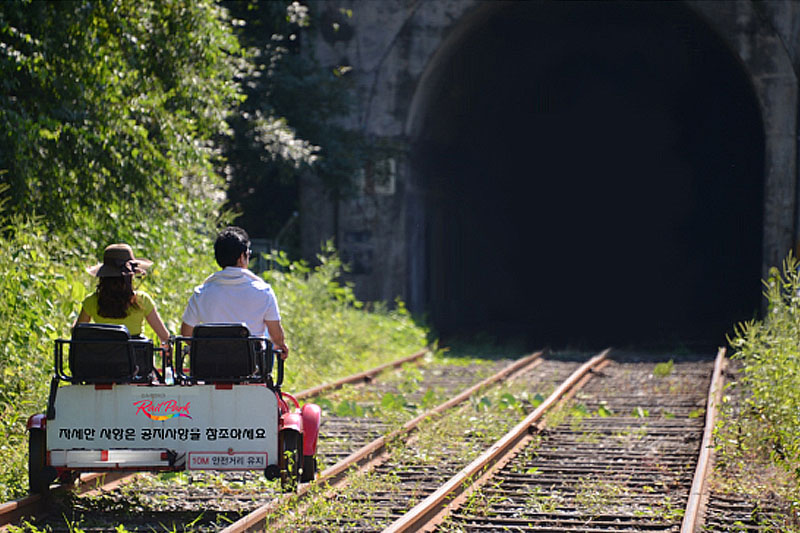 Child: ￦140,000
had a great time here and definitely memorable. It was a fun ride despite the fact is is very tiring to cycle on a Rail. You will definitely the suburb views, the sceneries especially the mountains and lakes.
100% Price Guarantee: We will refund the difference if you find a lower price online or at your destination. Find out more.
Detail Photo Description

1. English Speaking Guide ( Early request Chinese guide Available )
2. Transportation
3. Admission Ticket
4. Hotel Pick Up Service
5. Lunch _ Grilled Chicken
cancellations must be made via email or telephone and cancellation must be done with our written notice.

- The customers are not registered for accident insurance covering the medical expenses in case of accidents happening on the day of the event, so please check beforehand with the tour guide if customers are registered with travel insurance from homeland.
- Please refer to the special terms and conditions on the website for insurance coverage.
Immediately after submitting your reservation you will receive a receipt of booking by email. Within 48 hours (often on the very same day!) you will receive a voucher confirming all details.
You must present a paper voucher for this tour. We will email a link to access and print your voucher at the Lead Travelers email address.

< Nami Island >
Namiseom Island was formed as a result of the construction of the Cheongpyeong Dam. It is a half moon shaped (462,809㎡) isle, and on it is the grave of General Nami, who led a great victory against the rebels in the 13th year of the 7th king of the Joseon Dynasty, King Sejo (reign 1455 ~ 1468). Namiseom Island is 63 km away from Seoul in the direction of Chuncheon, and is famous for its beautiful tree lined roads. The island is 30 minutes away from Chuncheon and an hour away from suburbs of Seoul. Since it is not far from Seoul, many couples and families come to visit.
A special feature of Namiseom Island is that there are no telephone poles. This is because all electric wires were built underground to keep the natural feeling of the landscape. The complex is 553,560 square yards with chestnut trees and poplar trees around the isle. In the middle of the isle, there is a grass field about 316,320 square yards. It is composed of education and training facilities, camping sites, swimming pools and water-sports facilities for motorboats and water skiing. There is also a theme park with merry-go-rounds, a shooting range, roller skating rink, and there are lodging facilities such as resort villas and bungalows.
< Rail Bike >
There are 3 different routes you can take - 1 shorter (4km one way) and 2 longer (7.2km one way). We took 1 of the longer ones (from Gangchon station to Gimyujeong station).As for the actual experience of the ride, it is a nice change from the bustling city lights of Seoul. It uses the old railroad tracks and you basically cycle to power your carriage along the tracks. Some parts are automated and based on what I could see, I think they will be adding more automated parts to the track, although my opinion is there should be some parts where we power our own carriage (otherwise where's the fun in it?). They offer a 2-seater  and a 4-seater . The scenery on the ride isn't totally stunning, but it was pleasant and fun. I'm pretty sure it is a lot more scenic in the winter.
The actual ride is about just over an hour long.
There is a rest-stop at the halfway mark where there is a nice view and vending machines that sell drinks and a store that sells food. At a certain part there is even a tunnel that plays Gangnam Style and Gentleman along with some lights (like a club) - totally hilarious and fun to see everyone dance and sing along.
Reservation