The Demilitarized Zone (DMZ) and the abandoned Panmunjeom village are a must See!! 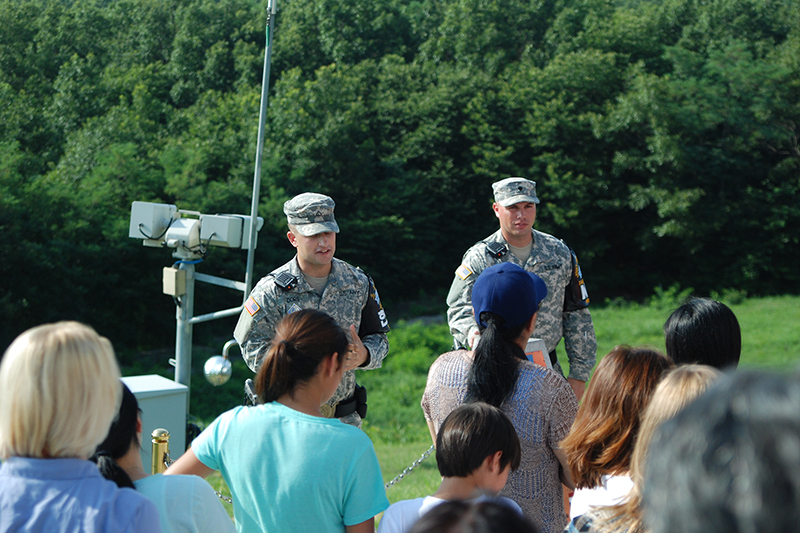 Senior: ￦157,000
Buffering hostilities from the north and south, the heavily guarded premises of Panmunjeom are located in the middle of the demilitarized zone (DMZ) and remain reserved strictly for political engagements. Providing the only road connecting the two countries, it is here where the historical signing of the Armistice Agreement took place between Communist forces and the United Nations Command (UNC) in 1953 after a succession of peace talks that lasted more than two years. However, although the event signaled an end to the Korean War, tensions resurfaced once again in 1976 when North Korean guards killed two American soldiers a short distance away, during the famous ‘Tree Killing Event’.

Although the premises remain a huge tourist attraction, pressure continues to swell and the de facto zone remains a virtual hot bed of unpredictability. Visitors are cautioned to follow strict protocol as not to upset northern officials. Yet such awareness seems to have very little effect in detracting tourists from witnessing such cultural differences up close. In fact, at the time of this writer’s journey, I was informed that bookings needed to be made far in advance as seats filled up extremely fast. Indeed, Panmunjeom was arguably the most eagerly awaited highlight of the journey. But although it remains a huge draw card to the tour itself, several other stops along the way proved equally rewarding.
100% Price Guarantee: We will refund the difference if you find a lower price online or at your destination. Find out more.
Detail Photo Description

1. English Speaking Guide
2. Transportation
3. Admission Ticket
4. Lunch
1. Hotel Sending Service
After the confirmation, cancellation is NOT available. NO REFUND. In case military or other offical considerations prevent entry into the J.S.A, it is inevitable, so yours are no refund. There is no refund if a tour is cancelle mid- tour due to military reasons and other offical considerations and so on. Tour route and schedule are subject to change ( include cancel )without notice whenever there is offical request from UNC.
< Notice >
1. Tourists must bring passport on tour day
2. Clothing Regulations: No worn or faded jeans, exercise clothes(pic.1), sleeveless, shirtsknee trousers, sandals and slippers(pic.2), miniskirts, round neck t shirt(pic.3)
3. The child who is under 11years old(Birth after:  is not available to visit JSA.(pic.4)
4. Consumption of alcohol is strictly prohibited
5. The cameras with over 90mm zomming lens are not allowed.
6. Panmunjom tours may be cancelled at any moment during the day of the tour if a particular situation arises in JSA
7. If a tour is cancelled mid-tour due to unavoidable circumstances in the DMZ no refund will be given
8.  When it is closed in case of some special situation.DMZ will be replaced by plan B non-refundable(Heavy rain or snow, military training)
* Plan B: Tomorrow's Whistle-Bunker Beat 131-Odusan Unification Tower-The War memorial of Korea

[ LIABLITY INSURANCE (CLAIMS-MAKD BASIS) ]
Cosmojin is registered in liability insurance corresponding KRW 300,000,000 for travel business license. LIABLITY INSURANCE (CLAIMS-MAKD BASIS).
- The customers are not registered for accident insurance covering the medical expenses in case of accidents happening on the day of the event, so please check beforehand with the tour guide if customers are registered with travel insurance from homeland.
- Please refer to the special terms and conditions on the website for insurance coverage.
Immediately after submitting your reservation you will receive a receipt of booking by email. Within 48 hours (often on the very same day!) you will receive a voucher confirming all details.
You must present a paper voucher for this tour. We will email a link to access and print your voucher at the Lead Travelers email address.

[Tong-il (Unification) Bridge]
The first hurdle to the Unification Bridge, go to the DMZ.
It must pass the Unification Bridge can go to the DMZ.
The bridge was built. "Hyundai Motor, Hyundai Construction, including that by the founder, Chung Department gotta chairman of the Hyundai Group, Chairman Chung is also known for the cattle drive 500 visited North Korea across the bridge."
[Panmoonjeom-Camp Boniface]
Camp Boniface is a UN military command post in the Panmunjom.
In charge of the soldiers on board the bus from here to conduct a passport check and costume tests again.
Camp Boniface achieved a briefing on security JSA in Panmunjom tour book tour.
The Camp Boniface wonhol the par-3 golf course with artificial turf inside the base composition, three sides of the course is surrounded by minefields have also called 'the most dangerous golf course in the world.
[House of Freedom]
Freedom House in the south, "Peace House" is, in the north, panmungak, there is unity each.
Freedom House and panmungak The need for a liaison between the north and south sides of the Red Cross has installed a permanent liaison office and put two direct telephone lines.
UN and ROK joint expenses here are foreign tourists who hold the passports tours are available, South Korea and other foreign nationals and must undergo a certain procedure separately.
[The Military Armistice Conference Room]
After the 1953 Civil Military Armistice Truce is where the whole conference is open.
The conference room inside the UN flag was placed on the table a long chapter, the following are passed to the Military Demarcation Line.
This coming and going and taking pictures of the inside is allowed but can not be the act of touching things or to speak to a soldier.
Expressionless in the talks and maintain a consistently tight due to the guard to the place where the tension flowing soldiers.
[The 3rd Observatory]
Two American officers who were supervising the work cottonwood tree pruning is where the North Koreans have been killed with an ax to 50-60 people.
UN forces back south side of the bridge does not come close to commanding the third post in the branches of a cottonwood tree covered in hitting five Korean laborers to work in vision? Guard that was, the soldiers of the North Korean military officers two names appear lifetime, "Do not hit the tree branches"I need.
The side guards ignored it and let us continue to work, and suddenly dozens of North Korean soldiers ran to the truck brandishing iron skewer sticks assault, etc., after the murder of US officers and two people with an ax to the rest of the icing junggyeongsang 9 peopleI went back.
Immediately after the incident in Korea, but US and South Korean troops prepared for battle, while the time was head of North Korea's Kim Il Sung was the case apple finish.
The case immediately after the Panmunjom Earth expenses divided Koreas began.
[Bridge of No Return]
The South and the North in the repatriation of prisoners of one, prisoners were crossing the bridge once was named "Bridge of No Return" in the sense that you can not go back.
South and North Korean military demarcation line, passing through the middle part of the bridge, both ends of the bridge has a post located in each country.
[Imjingak Park]
Imjingak is located in 7㎞ across the south of the Military Demarcation Line, the Imjin River. North Imjingak near the ground seemed to be caught in the hand is where the remains of 6.25 war is a tragedy.
For displaced people came down from the North Imjingak built in 1972 and operated as a game may peace center will showcase data indicating the appearance of the life and videos showing North Korea and North Korean land overlooking a little closer to the observatory on the third floor through a telescope there.
[DMZ theater and exhibition hall]
In the civilian access control line, Gangwon Province to be set up a unique museum.
Before the symbol of the world's only divided country DMZ (demilitarized zone, DMZ).
Military conflict lasting 60 years, people do not touch the hand of a reconfigure an intact environment and ecology exhibits and videos stored in places.
[The 3rd Infiltration Tunnel]
North Korea has put a secret passage drilled so that you can move only 3 per troops to invade South Korea. The passage is about to be moved wide to the tank. Enjoy a walk out from the tunnel thrilling experience for the invasion of North Korea threatened South Korea.
[Dora Observatory]
The northernmost of the South. Is where the best views of the North. Here is a view of the residential town of the north of the Kaesong Industrial Complex and the North Min.
[Dorasan Station]
The last station and the first station to go to the north of the South. If this unity is the starting point and terminus of the crossing where trains linking the Eurasian continent.
someday it will take you to Europe through the Trans-Siberian Railway.
Reservation